Over the last few months, I have grown increasingly loud about my support for initiatives that foster diversity and inclusion in tech & business. This has been especially true over the last couple months as I’ve watched what started out as Female Founder Office Hours culminate now in AllRaise.org. What I wanted to see grow and expand—a push from female VC’s like Megan Quinn, Aileen Lee, Jenny Lefcourt, Jess Lee, and their team members to bring more women into tech and foster a support system for them—has indeed now germinated into a force (and I can’t help but be amazed at what they & their allies have already accomplished in such a short period). I’ve written a response piece to AllRaise’s announced launch already, but sometimes one statement of support just isn’t enough.

I came into tech almost accidentally from the music world. That’s really my wheelhouse and one of the main industries I continue to build for and strive to impact. But lately, I’ve been running a thought experiment: is there theoretically anything that could make me walk away from music, even for a little bit?

Recently, I’ve come to the answer that yes, there is: diversity, inclusivity, and egalitarianism.

We’re at an inflection point now—the smart people realize that the future success of and in tech/business will be had by those who invite new perspectives and prize egalitarian dynamics. The future of the tech IPO no longer looks like a bunch of white guys huddled around a singular mindset. Now it looks exactly like Stitch Fix founder & CEO Katrina Lake holding her infant child ringing the bell to bring her company public—just as that picture was a metaphor for changing dynamics in tech, so too is an initiative like AllRaise key in helping usher in that new era of opportunities. 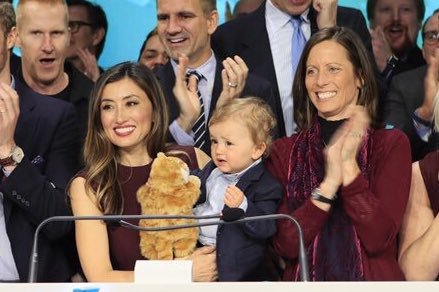 So if I sound excitedly determined, it’s because I am. Because the historian in me can discern that we’re at the beginning of a new cycle rife with possibilities to have a more diverse tech and business universe than we’ve ever had before.

At the end of the day, I will always be the first to make a music reference, and this just has Riot Grrrl punk written all over it. It’s brilliant and I am 100% behind it.

Given my somewhat short break from writing since January, I was wondering what my first post back would be on, and if it would be a lengthy assessment or a short burst.

Short burst it is.

I’ve been following (and championing) very closely the initiatives proposed and undertaken by the group of amazing women behind (first) Female Founder Office Hours, (then) Founders For Change, (followed by) Women in VC community events, and (now) AllRaise.org. Reading Aileen Lee‘s post from yesterday, it’s clear to me that even as painfully slow as it sometimes feels, change is indeed happening. I have sought and want to be a part of the change. And I know there are others like me who do as well.

I have tried to stay keenly aware of my inherent white guy privilege and use that to the benefit of others. I can only be what I am, but I get to determine how that helps others without the same afforded benefits. I can be an ally for the scores of women and underrepresented founders (POC, LGBT+, etc.) who aren’t afforded the same benefits of the doubt off the bat which they should be, and I can similarly use whatever position I have to push for more egalitarianism. And that’s what I try to do daily.

With the announcement of AllRaise.org and its focused initiatives, it is my hope that there is and will be room for the (white & male) allies out there like myself who want to be a part of this new evolution. I am excited to see where something like this can go. We are in the midst of a massive paradigm shift—one which is long overdue in creating a more level field of merit, diversity, and inclusivity. Consider this my name in the AllRaise hat.

I encourage my white and male counterparts out there to afford Aileen’s post and this initiative a heavy dose of retweets and attention; this is the new direction. Be the person who gives the shots to people who otherwise might not get them, and bring attention to the fact that there is clearly work to be done here. Take it from a history major: there is a right side and a wrong side of history—you want to be on the former, not the latter.

To Aileen, the AllRaise team, and the other women, POC, LGBT+, etc. looking for allies: we’re here. Tell us what you need and how we can help. We’ll follow your lead.